Cash vs Card: Which is better for overseas expenses? 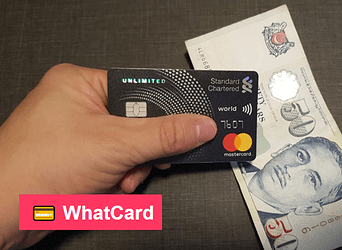 For those who travel regularly and are active credit card users, a question that often crops up is whether you should change all the cash you need beforehand at a local moneychanger, or just go ahead and use your Singapore credit card when travelling overseas to get bonus rewards.

Most people would already be aware that using your credit cards overseas is not “free”. Your bank will usually charge both a:

These extra costs are what pay for your bonus card rewards for foreign currency spending. But do the benefits of bonus credit card rewards actually outweigh the extra fees charged by the bank? Lets dig in to figure out together!

Many cards, especially the airline miles cards that target frequent travellers, offer bonus rewards rates that can be significantly higher than the usual local earning rate. For example, the DBS Altitude, Maybank Horizon Visa, and Citi PremierMiles give 2.0 MPD (Miles per Dollar spent), and premium cards such as the StanChart Visa Infinite can even offer up to 3.0 MPD on foreign currency spending.

*This is based on assumption of a valuation per mile of 1.5 cents/mile. We are separately working on an article to elaborate more on how to calculate this and will be posting it soon!

So, how much extra do banks actually charge you when you swipe your card overseas?

Standard Overseas Transaction Fees - as complied on the Milelion blog:

As you can see from the table, the various banks charge different fees, and these fees also vary by card. However, you would typically expect to pay a foreign currency transaction fee worth around 3% of the total value of spending.

And don’t forget that banks also charge you an exchange rate that can be quite significantly worse than what you see online/get at the moneychangers. Based on some research we did, you can probably expect to lose another 1-3% on the exchange rate given by the bank.

If you add both the transaction as well as currency conversion fees together, you are looking at a cost of 4.0–5.0% when using your credit cards overseas – which when you compare it is actually higher than the value of any credit card rewards you are getting.

There are sometimes promotions such as the OCBC 90N’s promotional rate of 4.0MPD for foreign currency spend until 29 Feb 2020 that may make it worthwhile overall to use your card overseas, but in general you are better off NOT using your credit card for all your overseas spending while travelling, unless there are promotions on the card that give a cashback/miles that are worth at least a 4-5% rebate.

If you do not use your credit card overseas, what alternatives are there? In our experience, there are 3 good options: 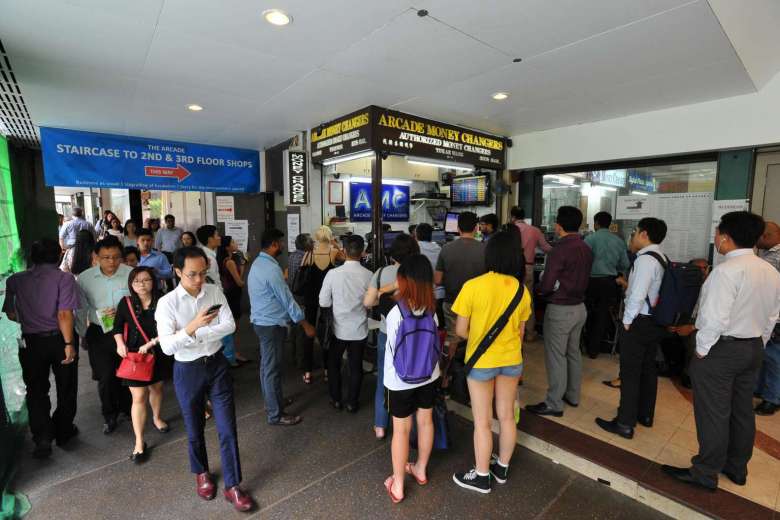 Singaporeans love to travel – and it is great for all the travelholics that our country has moneychangers everywhere, helping to makes our exchange rates really competitive in general. The Arcade is 2 minutes walk from Raffles Place MRT, and it has dozens of moneychangers offering extremely competitive rates close to what you find on Google/Yahoo Finance. From personal experience, we find the rates at Arcade Money Changer (the one right outside) to generally be pretty good, however if you are exchanging a large quantum, you may want to shop around inside for the best rates. 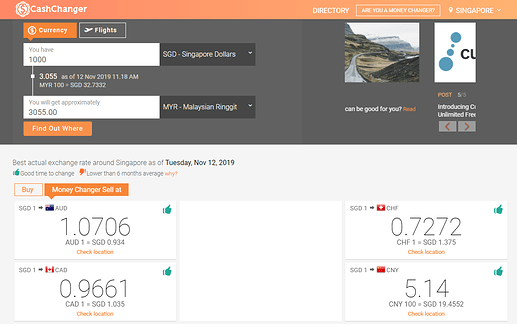 This is the outcome of a relatively new fintech concept of aggregating moneychanger’s rates online, so that customers can view and book a rate online and just make the transaction at the outlet instead of having to make the trip down to a moneychanger only to find a poor exchange rate.

We are aware of www.get4x.com and www.cashchanger.co, however, we have yet to personally use either startup’s services. In the future, we may consider doing a review of them for you readers!

The foreign currency wallet-linked debit card is yet another fintech concept that emerged in the last 1-2 years. We are planning to do a more in-depth comparison across each of these options (YouTrip, TransferWise, Revolut, etc.) in a further article that you can look forward to, but for now we will focus on YouTrip, the more established one amongst the options available for Singaporeans.

Several other sites have written long, detailed reviews of YouTrip, so we will keep it short on why a multi-currency wallet such as YouTrip is a good alternative to either credit cards or cash overseas. It functions as a debit card that works anywhere Mastercard is accepted, but with two distinct advantages over directly using your credit card:

We ourselves have been using YouTrip for some time now, and can definitely attest to the much better rates when using YouTrip to pay overseas as opposed to our regular credit cards. As as example, the same CHF4.40 transaction on the same day (1 day gap due to time differences) costs 19 cents more on a transaction worth S$6.04, or ~3% more on Amex as compared to YouTrip. 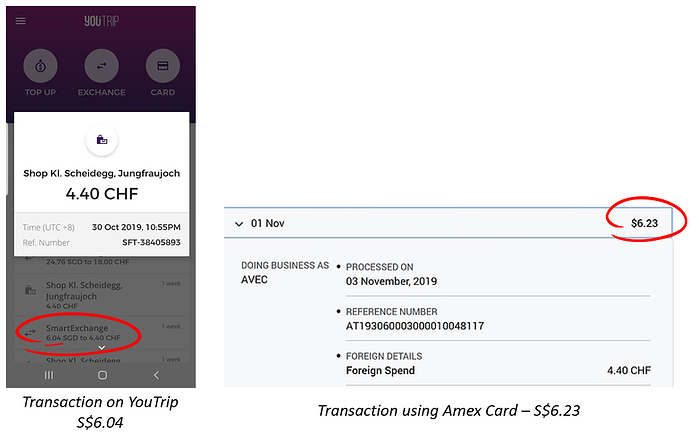 If you are interested to sign up for a YouTrip card, you can use the promo code WHATCARD5 and get $5 cash credit in your account. We run WhatCard as a passion project, and affiliate revenue helps us to keep the site running and keep bringing new content to you.

Putting it all together

Using credit cards overseas can get you bonus rewards, but as you can see from the math it typically would not make sense to do so unless there are special promotions going on that you can take advantage of.

YouTrip is the first multi-currency wallet that made quite a large splash in Singapore when it launched last year, but we have started to see other similar products come out this year, and I wouldn’t be surprised if even more options come up next year.

The foreign currency wallets are actually a pretty good alternative to either credit cards or moneychangers – allowing you to continue swiping while overseas and avoid the risk of bringing thousands of dollars of cash overseas with you while travelling.

Look out for our next article where we will be comparing the various foreign currency wallets in greater detail!

This article is brought to you in collaboration with YouTrip

This December only, get $200 in cash (via Paynow) when you sign up for a Citibank card , with no spending required and first year annual fee waived. Only for new-to-bank customers, defined as those who have not owned a Citibank card in the past 12 months. Find out more about this promo HERE .

The StanChart X Card has finally awarded it’s 100,000 miles sign up promo
The $288 IG 45th anniversary promo cash bonus has been fulfilled
YouTrip, Transferwise, Revolut, DBS MCA – How do you choose a multi-currency wallet?
10 Hacks You Need to Know To Save Even More Money