Edit: It seems that you cannot use the GPMC either, but we have found that CardUp can be used as a workaround to pay your bills using Grab Credits.

Those of you have been following this blog will know that we were one of the first to break the story back in August regarding the opportunity to get up to 10% cashback/3.2 MPD on all your regular bill payments by using the AXS mobile app and paying via GrabPay - if you are not aware of this you can check out the full article here

However, as of today (16 Dec) we started getting reports and also personally tested out ourselves that the AXS mobile app is currently not accepting payments directly via Grab Pay anymore. As you can see from the screenshot below of me trying to pay a Singtel bill - the GrabPay option is greyed out, and if you try anyway you will get the message “Please note payments via GrabPay are unavailable until further notice”

Message that appears if you try to use the GrabPay option 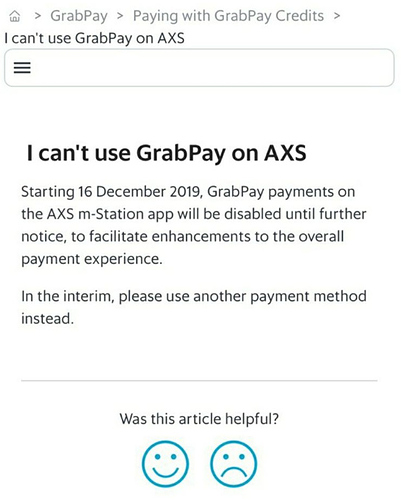 Message shown on the Grab FAQ regarding this change

This may just be a temporary issue as GrabPay undergoes some expected changes and updates as part of the launch of the physical GrabPay MasterCard (GPMC) that they have announced. Personally, we do expect the GrabPay option for AXS to come back online in some form or other since this was a relatively new feature (you can still the GrabPay option is still tagged as “NEW” on the app).

As Grab starts to roll out the GPMC more widely to all Singaporeans, one possibility/likelihood is that instead of having a direct GrabPay option on AXS, they instead start publicising and encouraging everyone to use the GPMC to pay AXS bills. Given that many Singaporeans still use AXS to pay their bills, this could be one way for Grab to get some additional publicity for their new card.

We would love to hear from you if you notice any changes while you use the AXS app - do drop a comment here so that we can help to keep everyone updated on whats happening with this!

1 Like
A workaround for paying bills with GrabPay Credits
AXS has quietly removed the GrabPay payment option
Lynn_Lim December 17, 2019, 2:55am #2

Even the GPMC under credit card option does not work.

yeah, didn’t work for me as well. Any other ideas how to use the credits?

Can use the new grab mastercard to pay bills perhaps?

That has unfortunately been disabled by grab as well.

So the using grab pay credit card to use the grab credit to pay off bills, does it work?

GPMC does not work for AXS payment, even via MasterPass.

I see. Thanks. Do update if there is new updates

I called up AXS, the staff told me that it’s actually Grab withdraws the payment option at AXS mobile.

Dont think CS staff would be privy to discussions between business partners and in a position to comment one way or the other on how decisions were made.

The 2.5% fee option is interesting to me in a different way… Not an expert but I always thought it is illegal to charge extra fee if people choose to use say a credit card to pay instead of cash.

We all know that all payment channels like e-wallet,credit card or even cash carry different cost/burden to merchants, would this also signal MAS to reconsider de-regulating charges merchant could levy customers based on payment methods?

Maybe we can start updating up all the websites that exclude GPMC, using this spreadsheet: https://docs.google.com/spreadsheets/d/1P3eZlP9U6wYfnhVEEfACv4O2hMZAwEKSzuiRMTciJGI/edit?usp=drivesdk

It’s contractually not allowed for merchants as part of their agreements with Visa/MC.

However cardup (and others) are all third parties so not bound by those agreements (and would argue are offering another service so separate anyway).

Should we add a seperate column to state what is the alternative? So we can all pool our collective knowledge on this?